Mom, Mik, a Mustang, and a Shoe

This afternoon Mom came home driving a rental Mustang.  I happened to be outside running my scooter to keep it from being ruined sitting totally unused so long and I was confused at a random car parking in front of our mailbox.  Mom's first words were "I didn't buy it!"  I did not think she did, but I did kind of think she may have lost or left her Prius keys somewhere and had to get a rental.  Turns out, though, she flew into Nashville because it is so much cheaper than Huntsville (actually right after we moved here I saw on the news it is the most expensive airport to fly in/out of).

She is headed back out of town tomorrow, so there was no point in getting her car from the airport.  Also, she thought Mik might find it fun to go for a ride in a Mustang, which is one of the types of cars he likes to check out whenever he sees them.  So, I disassembled his manual chair and managed to get it to fit with enough room for me to still sit the back and Mik in the passenger seat.  I had figured that out before bringing Mik out, though, so he had to drive his powerchair out to load into the car.

Instead of just putting him from his powerchair into the car, Mom decided to just hold him sitting on the hood while I drove the powerchair inside the house, which I am proud to say I managed to do without driving off the sidewalk even once (see previous post about last attempt)!  Mik and Mom were not so successful at what would have seemed the easier task of just waiting, as I came back out to the two of them laughing as Mik was sliding off the hood and the two of them almost falling on the ground.  I grabbed Mik and held him up while Mom got a better grip and I could get into the back seat before putting Mik in the car, but nicely even if I was not there the guy from across the street had seen what was going on and came over to help if needed.

In the whole fiasco I had seen that Mik lost his shoe and assumed that Mom had, too and had picked up the shoe.  However, we get to the restaurant and I pick up the other shoe that had fallen off in the car thinking it was the one he lost outside the car, but then realized Mom had not picked up his shoe.  Not surprisingly, it was still were we left it went we got home from dinner and a movie five hours later. 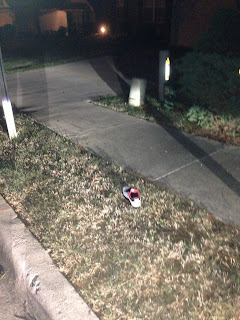