Mik Stuck in the Bushes 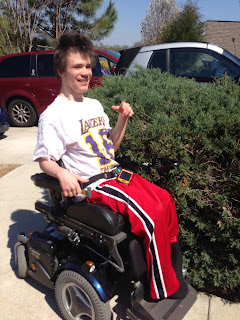 I forgot I had taken this picture of Mik getting stuck in the bushes when he was bringing in his powerchair from getting repaired (the controls did not work when it arrived on the moving truck back in February) the one weekday Mom was home earlier this month.  Clearly, we need to widen the sidewalk, which we kind of suspected, as we had even widen the turning area of the decently wide ramp up to the old house when he got his powerchair.

It did seem like it would be a tight, but doable thing if he took it slow.  Not so much, as he quickly ended up in the bush and he could not get out because it was the control stick part stuck in the bush.  I helped him onto the porch, but not without going off the sidewalk into the bushes on one side and the grass on the other several times, since it really is hard to line it back up on the sidewalk it just fits on once your offtrack.

The real funny thing is that one of the things he said when we were house hunting in Alabama was that he wanted to have bushes in the yard including maybe planting them.  Now I think he is good with what we have and perhaps less near the sidewalk.
Posted by wildcat1001 at 6:41 AM