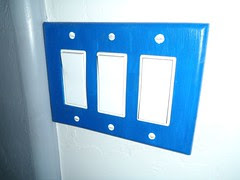 Yesterday I painted most of the switch and outlet plates for my room.  The one I did not finish, though, was the three switch one for the bathroom.  The main reason it did not get painted in the first round was that it was broken, so I wanted to replace it.

I picked up a new last night (splurged an extra $1 for the unbreakable style), painted it, and got it ready to put up this morning.  However, in trying to install it we realized the reason the other one was broken was that it had to be sort of jammed over the light switched because the closet trim is so close to the left side of the switches.  Thus Mom got tasked with sanding the edge down.

Well, by evening it still was not installed, as somewhere along the way Mom stopped sanding.  She made it seem like it was a big effort sanding job, so I just went out to the garage and got the electric sander.  Ten minutes later it was ready.  It would have been ready in five, but I had to stop to come inside to rewind the Nats game and see Bryce Harper steal home.

It still took some finagling to get the switch plate on, but I now have an uncracked switch plate that is also blue to match the rest.
Posted by wildcat1001 at 8:48 PM