Painted Switch and Outlet Plates for Mik, too 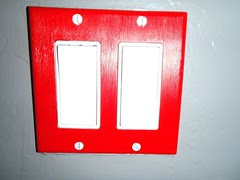 On Monday I finally got my bed in my room and Mik came over to my room to watch Castle instead of our usual watching in his room.  It was the first time he had seen my room done.  The first thing he noticed was the awesome blue switch plate and he wanted his painted, too.

Earlier this week I talked with him to see what color he wanted his painted.  At first he just wanted his switch plate in his room painted, but we decided to do the two outlets that are not hidden by furniture and the switch and outlet plates in the bathroom.


For his room he choose a red.  Since we wanted to stick to the acrylic paint colors we had in the house, he got stuck with a color that is sort of orange red.  I painted them in my room and the orange seemed to stick out, but once I took them into his room and put them against the lighter colors of his walls they do seem more red.  Even the orangish aspect works, though, as he has a stained glass canyon painting that has reds and oranges as part of what I call his art gallery in his room.  The outlet that he plugs his strawberry wall flower fragrance holder looks especially awesome. 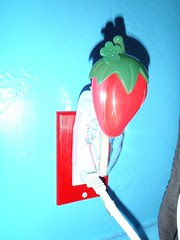 For his bathroom, I thought he would go with red, but he surprised me by saying the bathroom ones should be green.  I did not understand why he would choose green when his towels are black and red, but he explained it would match the green lines in the bathroom flooring.  I actually rather forgot that it in fact originally had a green color scheme.  The green I used ended up being rather dark and almost looks black, but since he has black towels it still works. 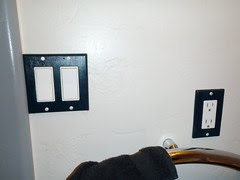 I totally jokingly said last weekend that I would slowly end up painting all the plates in the house, but what room to do next?
Posted by wildcat1001 at 9:43 PM