Is it downsizing or upsizing our fleet?

Ever since we moved to Alabama the driveway has been overcrowded with the four vehicles (5 if you count my scooter).  They all fit at first, but then the Homeowner's Association said I couldn't park my scooter on the porch and we actually began to keep the wheelchair rack on the van, so they all didn't fit.  Since we were looking at houses here, I also have wanted a boat and then we would need a truck to be able to tow a boat.

Last month Dad took me to the dealership on one of his off Sundays because I was asking him something about trucks (probably what colors Chevy makes).  At first we looked at and test drove an Avalanche, but in the end we (i.e. I) decided on the Silverado because they still make them and thus there were more to choose from so we could get the options I liked the most (mainly the bench front seat, which had a better console and storage for road tripping). 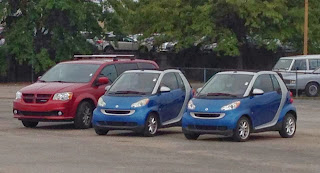 Mom was hesitant at first because she did not want to give up her Smart car, but it had not even been registered in Alabama, yet, and thus she had not driven it in at least six months anyways.  Thus, by trading in both the Smart cars and the Dodge Grand Caravan for one vehicle we downsized our fleet to one vehicle per driver.  It also meant now all the vehicles fit in the driveway. 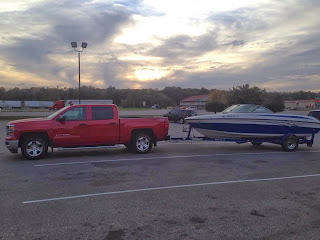 However, Mom calls it the big ass truck.  It is big and the driveway does end up seeming kind of more crowded, but it is much more suited to our needs. For one, it can pull grandma's boat, which we are keeping in Alabama for the winter instead of storing it like is usually done when the cottage is closed up for the winter.  Secondly, the mini van was not exactly suited for Mik's heavy powerchair and this will work out much better for family road trips, especially once the seat lift is installed for transferring Mik into the Silverado. Thus, it is somewhat upsizing our fleet.
Posted by wildcat1001 at 4:02 PM