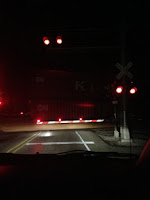 I guess it is good we decided to leave the night before to drive down to Birmingham for our flight.  However, leaving at 11:30 p.m. and then ending up with a half hour train stop/detour made it seem kind of crazy to go up early to only save an hour of driving in the morning.  At least the hotel had free breakfast and we just used Hyatt points rather than paying.  Of course, it meant way less sleep overall and mom doing her final packing at hotel (we firmly had to tell her no packing in car in drive, as that sure leads to chaos!).
Posted by wildcat1001 at 3:31 PM