It is similar to his old one, but it is a bigger version.  He likes that it is silver, as it goes better with his room.  He also likes that he has more space in his room, since as part of putting in a new fridge we decided to clean out the closet to be only long term storage (i.e. stuff he only needs to take out once a year or less, mainly his Christmas village and empty video game cases) and put the fridge in the closet doorway.  He is still getting used to the door opening from the right instead of the left, but he totally loves everything about it and seems to have something to say about it every time I go in his room.
Posted by wildcat1001 at 5:58 PM No comments:

We pulled up most of what was left in the garden back in mid-August and then began planting for the fall season.  The only plants we purposely kept were the Basil and Greek Oregano.  We also ended up with Chocolate Mint coming back up, which is good because we could not find any sort of mint to buy and replant like I wanted.  However, it is growing around the base of the oregano, so we kind of have an odd almost hybrid mint oregano plant (see below).

Today I planted the tomatoes and the stevia plants we bought as the final things to plant in our garden for the fall season.  The other things we planted from seed back in August.  We planted Snap Beans, Broccoli, Carrots, Cucumbers, Dill, and Sage.  Everything, except the Sage (planted from old seeds we had around and did not really expect them to grow), has already started coming up. 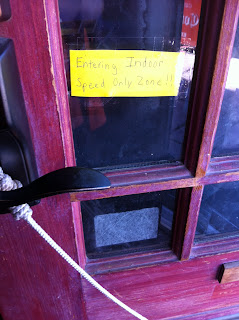 The occasional moving things around with his power chair does not bother me, but he was totally out of control driving in what we call speedy speedy mode when I have told him several times to use indoor speed in the house.  The furniture is all way more than adequately out of the way for him to have navigated around and got what he needed/wanted without having to move any of it, although I can understand him bumping into the desk and moving it a few inches.  The problem was he moved things feet, which meant he did not just stop when he bumped it and/or he was zooming around like crazy.  Now I have a firm Indoor Speed Only Zone sign and he better not go crazy in outdoor mode again.
Posted by wildcat1001 at 9:16 AM No comments:

When and How Not to Visit Fort Bowie NHS 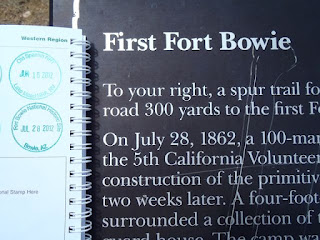 Yesterday, Dad and I went to Fort Bowie National Historic Site.  I had been wanting to specifically go on July 28, 2012 for months because it was the 150th Anniversary of the Fort and getting the National Park stamp on that day counted to get a special 150th Civil War Anniversary certificate with the National Park Travelers Club.  Unlike usual, I totally winged it and all I looked up was the address of where the park stamp is located (the visitor's center).

We arrive and it is just a parking lot and you have to hike a mile and a half to get to the fort and visitor center.  Not that big of a deal normally, but it is July and it was already hot at 10 a.m. and it was only likely to get hotter.  Plus, we brought no water, no food, and I was wearing new shoes.  Despite seriously considering giving up on it, we trekked on.

The hike was not really that bad, but it was hot.  Of course, we get there and there are at least ten other visitors that certainly did not hike in, as we were the only ones in the parking lot.  Yes, we did see there was a number to call to find out how to access it if you cannot walk the trail, but we took it seriously as something not to abuse.  Apparently, they do not really care, although you do not get the real experience if you do not do the trail and see the sites that relate to and really lead up to the creation of the fort.  It was worth it overall, but I would have rather just drove up and got the stamp for the day and come back in the fall or spring when the weather is nicer to really experience the site.
Posted by wildcat1001 at 11:23 AM No comments:

I Knew I Should've Avoided the Disney Store

Yesterday, I was walking along Michigan Ave in Chicago to go to Best Buy and get some headphones because I did not bring any on the road trip and wanted some for listening to my iPod on the flight home today.  My plan was just to hit the stores with Shopkicks on the way.  I skipped the Disney Store on the way there, but I could not resist going in on the way back.

Of course, once there I could not pass up the fun Windy City Chicago Vinylmation guy.  Also, I found a fun one with little Mickey's representing flags of the world.  Lastly, I finally got a Cubs Vinylmation.  I really want a Nationals one, but alas they do not make one (maybe, they will if the Nats keep being awesome!).  I do not want the Cubs one in my ledge collection at home, but I could not resist getting it for Mom's apartment because it was perfect for the TV room that has Wrigley Field and other Cubs decor.  I certainly did not need 3 Vinylmation, but once I was in there and they had Chicago ones and the newer flag one I just could not resist.  At least I did resist the fun scented ones.
Posted by wildcat1001 at 8:41 AM No comments: 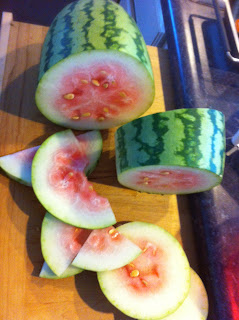 Yesterday, I harvested the first watermelon from our garden.  It seemed ready to pick, as it looked right, sounded right, and seemed to have stopped growing for the past week.  Well, it ended up being pink inside and not quite ripe.  It did at least still taste a little like a watermelon and was not bitter, but it also was not sweet at all.  Oh well, we still have almost ten at various stages of growing, so maybe I will figure out when they are ready for at least one of them.
Posted by wildcat1001 at 7:13 AM No comments: 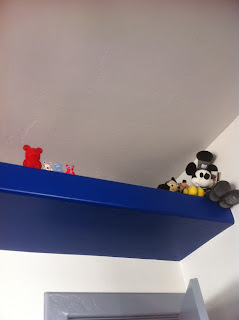 I finally have a few Vinylmation figures.  When I first saw them in Disney stores last year, I did not really like them much less want any other than I did actually buy one at the D23 Expo last year, but that was mostly because it came with a pin I liked.  However, ever since I moved into the Master Bedroom and made it themed Disney I have wanted to get some Vinylmation to put on the ledge.

The collection started with the ice Vinylmation that I only got because I wanted the ice cube mold it came with.  It was not really a collection, though, until I got some more in Disney World earlier this month.  Now I also have a big red light one, a 2012 one, and a Norway flag one.  Eventually, it would be cool to have them all across the ledge, but I am being pretty picky on the ones I get and the only ones out now I do not have that I want are ones that I am probably going to have to get on eBay because they are old like the bowling one and/or come in mystery box sets.