Just Friday all the okra that had gotten close to ready to harvest had been destroyed by ants, but yesterday when I went out to pick tomatoes I ended up finding some pretty large okra.  I ended up harvesting quite a several big ones and a few regular picking size.  Since we leave for our first summer vacation early Friday and the kitchen is a disaster, there will be no cooking with them now, but I cut them up and froze them for use later.
Posted by wildcat1001 at 7:44 AM No comments:

Mik in our garden for 1st time

Mik was involved in the garden project as he helped pick out what to plant, but until today he had never actually been out to see it.  Tonight for the solar eclipse we already had brought the wheelchair down the steps to the backyard, so it was not too much more to go over the railroad ties to get out to the garden.  He enjoyed seeing everything we had planted and we even found 7 cherry tomatoes ready to pick and eat (yeah, only one made it back into the house!).
Posted by wildcat1001 at 7:46 PM No comments:

This evening we all watched the solar eclipse in the backyard.  It is not often we all end up in the backyard since it is not accessible for Mik to get out there.  I made the pinhole solar viewer from a cardboard box lid this morning and was ready to watch it when it started, but Mom and Dad did not get my text until 6 p.m. and Mik had to get changed when they got here, so they did not all end up outside until a few minutes before the peak.

It was cool to see the eclipse reflection on the garage.  It was especially cool to get Mik out to do something in the backyard.  If we just got the motorhome out of the driveway, then he could get back there with his powerchair and try out shooting hoops.  Maybe, by the end of the summer and when it starts to cool down again it will be doable, as that is on the list of summer projects to fit in between out kaotic summer travel schedule.
Posted by wildcat1001 at 7:29 PM No comments:

Who knew to look in the bathroom for autumn leaves?

I can remember several times buying fabric leaves or going searching for some autumn leaves to do some craft project.  Today I was working on clearing out what I do not want of what Mom left in the master bathroom and I ended up realizing that there is a dead plant above the linen closet.  I can remember it being live at one time, but it probably has been dead for years now and has very dried out brown leaves.  Actually would be a cool fall centerpiece just as it is.
Posted by wildcat1001 at 5:05 PM No comments: 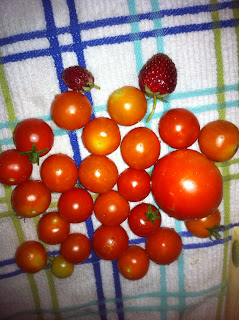 Our garden is producing quite a lot of tomatoes.  The picture is of today's harvest, but it has been about that many every time I go out there to harvest (usually every 2 to 3 days).  Today the two strawberries were also very ripe.

I would have thought there would have been some okra by now, but the biggest I see now is smaller than the biggest last week and no I did not pick that one.  The ants seem to be eating the okra.  The rhubarb is the plant they are totally crawling all over all the time and eating the leaves of, but they are not even touching the strawberries which are one of the plants between the okra and the rhubarb.

Trying to figure out how to get rid of the ants, but at the same time not really going to try anything too major since the rhubarb is still thriving as is the rest of the garden and I could live without the okra if the ants keep eating all them.
Posted by wildcat1001 at 1:38 PM No comments: 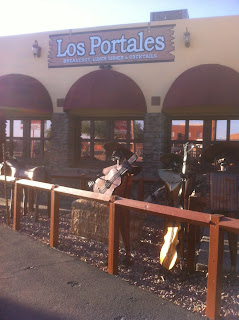 Last night I went out to dinner with Mom and Dad to go to a Mexican restaurant for a cultural activity for my current Masters in Education course on multicultural education.  We ended up at Los Portales, which at least Mom and I had not been to before.

The most common Mexican place we end up at is La Salsa, which sure is not the same being a chain, but it is nearby and more fast food.  Mom almost always gets a shrimp quesadilla.  Thus when she said that was what she was getting at Los Portales, which had a lot of different shrimp dish options, I would not let her.  She ended up with a dish with shrimp topped with cheese and a chipotle sauce.  It was spicy, but she did like it.
Posted by wildcat1001 at 9:48 AM 1 comment:

Painted Switch and Outlet Plates for Mik, too

On Monday I finally got my bed in my room and Mik came over to my room to watch Castle instead of our usual watching in his room.  It was the first time he had seen my room done.  The first thing he noticed was the awesome blue switch plate and he wanted his painted, too.

Earlier this week I talked with him to see what color he wanted his painted.  At first he just wanted his switch plate in his room painted, but we decided to do the two outlets that are not hidden by furniture and the switch and outlet plates in the bathroom.


For his room he choose a red.  Since we wanted to stick to the acrylic paint colors we had in the house, he got stuck with a color that is sort of orange red.  I painted them in my room and the orange seemed to stick out, but once I took them into his room and put them against the lighter colors of his walls they do seem more red.  Even the orangish aspect works, though, as he has a stained glass canyon painting that has reds and oranges as part of what I call his art gallery in his room.  The outlet that he plugs his strawberry wall flower fragrance holder looks especially awesome.

For his bathroom, I thought he would go with red, but he surprised me by saying the bathroom ones should be green.  I did not understand why he would choose green when his towels are black and red, but he explained it would match the green lines in the bathroom flooring.  I actually rather forgot that it in fact originally had a green color scheme.  The green I used ended up being rather dark and almost looks black, but since he has black towels it still works.

I totally jokingly said last weekend that I would slowly end up painting all the plates in the house, but what room to do next?
Posted by wildcat1001 at 9:43 PM 1 comment: