While I haven't gotten around to painting my switch plates blue in my new room, one of the first things I tried to do when we moved in was put up my farm brand plate we used to have in the great room on a light switch near photos of my great grandparents farms in North Dakota. However, the plate was designed for rectangle switches and none of the lights have that in our new house. Eventually Dad may have gotten around to making one work for it, but tonight I realized the speaker control knob's plate was a rectangle.

Now if only the bookcase wasn't taking up that wall, as that would be the logical place to put the farm photos. I guess maybe, I will let Dad try his idea of switching the bookcase with the piano in his den, as then there would be wall space for the farm photos, but it will also make the furniture more crowded as it sticks out more than the bookcase and that feels almost too close to the couch as is. 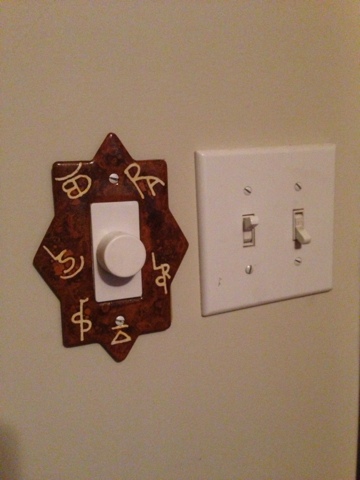