Dad and I stayed in Alabama for Thanksgiving while Mik and Mom enjoyed it in Chicago.  Dad and my main plan for Thanksgiving for weeks had been to go fishing, which originally meant taking the boat out.  However, last week we found out about an affordable lake house with boathouse for rent and instead all we did with the boat was move it to the garage at the house we rented through the end of 2014.  First Dad had to bail the ice and water out of it, though. Good thing we moved it to the heated garage on Wednesday, though, as Thanksgiving morning we woke up to it being 17 (it was not even forecasted to get below 25!), which is when I found the rain gauge frozen since I had not emptied it from the rain we got earlier this week.

On Thanksgiving we did fish some for crappie from the boathouse and we had the right stuff to do it.  However, we did not last long because it was cold and we were not getting any bites.  Gave up after about an hour when I got my jig stuck on the bottom and we had to break the line.  Decided to go back up to the house and start decorating for Christmas rather than hook up another jig.

Until last week we weren't going to do a Christmas tree this year even though we always planned to do Christmas in Alabama.  We just did not have room in our house with two rooms still full of boxes and the living room crowded as is.  However, now that we rented the lake house we have plenty of room and we have decided we will do Christmas there.

On Wednesday, Dad and I went up in the attic and brought down what we thought was all the Christmas decorations.  When we got to decorating, though, we found we were missing the most important box, which was the one with the Disney decorations and that includes everything for the tree.  Thus, we had to make a trip back to town to search through storage and the attic and finally located them in the final possible box in the back of the attic.  Still have not located any of the inflatable penguins for putting out in the yard here, although they could be in one of the cardboard boxes in Dad's office. As Dad cooked up the salmon, green beans, and sweet potatoes for Thanksgiving dinner, I decorated the Christmas tree and decorated part of the bar between living room and kitchen.  Dad also put the Southwest Nativity set on the bar and as the only one tall enough to put the topper on he got to put the topper on the tree, too. 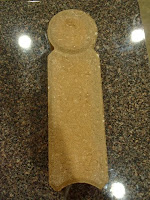 Sunday Mom and Dad went to Lowe's to get holiday lights.  They saw a display with bricks painted as snowmen and bought a brick to bring home to show me.  Dad wanted to buy a bunch right away for me to paint for the yard, but Mom said to just get one because sometimes I shoot down her project ideas as silly.  I did not shoot it down this time, but I did immediately decide the brick should be painted as a penguin and not a snowman. 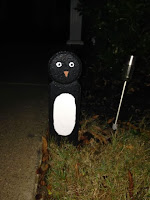 After going back to Lowe's for paint and 11 more bricks, I got home and told Mik I was making a penguin army.  I finished one that day and placed it outside by the sidewalk. 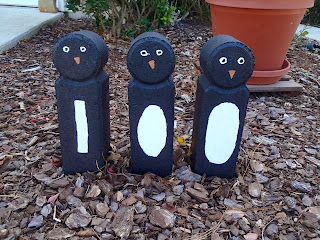 Yesterday, I painted more of the bricks and also came up with the idea of painting one of them to have his belly look like the number 1.  Then when placed next to two with their regular bellies looking like zeros we have our house number.  In putting the three for that with Dad, I dropped one and Mik was sad he did not get it on video because I "killed" a penguin. 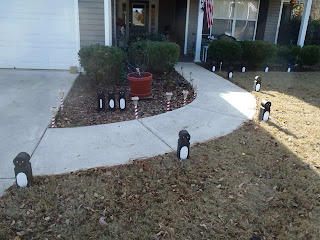 Today I finished painting the rest of the bricks and fixed the injured penguin, so we now have a dozen penguins in our yard as part of our holiday decor.  Now to get the inflatable ones out of the attic, which are involved in my scheme to earn us another warning letter from the HOA.
Posted by wildcat1001 at 2:35 PM No comments:

Time for a Modern Thermostat

Since we moved into this house, I have wanted to get a new thermostat because it is not programmable.  It is just one of the many things that make this house that is at least a decade newer seem actually older than our 1995 house we built in Tucson.  I even found the one I wanted to get a few months ago, but we just have not gotten around to buying it.  This morning waking up to my bedroom being 60 degrees and finding that the thermostat reset to a setting of 64 (yeah, my room runs 3 to 4 degrees less than the thermostat even in summer) is a real reason we need to get a new thermostat.

Perhaps, it just needs a new backup battery, as the power was only out for an hour and I know our one in Tucson did not lose its setting for power outages that fast.  However, instead of changing it, it is finally time to have one that can be programmed to different settings for time of day and is more energy efficient.  Also, the one I picked out can be controlled from our phones, so from my room I can override when Mom and Dad sets it down ridiculously low in the summer (we all seem to not need to touch it since we went to heat mode and picked the 70 setting, although yesterday we found Mik's room to be extra toasty, but he likes that).
Posted by wildcat1001 at 4:18 AM No comments:

This morning Dad moved a pile of Mik's laundry from the living room to Mik's bed and told me to fold it.  I in turn told Mik to fold it and if he need instruction to ask.  This evening Mik asked me to watch Bones in his room and the clothes were still on the bed. He said we could watch in the living room instead, but I don't really like the couch. I said I'd sit in his recliner chair and he said he'd lay on his bed and just move the clothes to the side.  Instead, though he proceeded to say he was folding his clothes and putting then away.  What he really meant was he was just putting then away in the drawer and skipping the folding, which is fine with me as he did at least match up the socks and I pretty much do the same thing with my tshirts.
Posted by wildcat1001 at 5:31 PM No comments: The other day Mom and I went to the Disney Store in Tucson and I got the big stuffed Olaf snowman guy from the upcoming Disney Frozen movie.  I was going to use it to replace the big penguin on my bed at home, since it is old and wearing out.  I almost also got Sven the reindeer, but he wasn't as big and mixing a reindeer with the other penguins on my bed seemed almost as bad as a polar bear, which I absolutely hate when they get mixed with penguins in designs because they are from opposite parts of the globe.
In the end, I left Olaf in Tucson to have when I am staying at the studio and I bought another one online for at home in Alabama.  I also got a Sven then, too. (Replaced Mik's Grumpy pants the carpet ruined last month, too)
When Sven arrived yesterday, Mik told me I couldn't put it with the penguins or he'll come throw away the penguins.  Mom said they could be mixed because the reindeer is Norwegian like our heritage, so an exception should be made.  I will probably just move the penguins to my office, though, as that's where the rest of my penguin collection is anyways and Sven and Olaf go better with my bed since my Disney stuff is displayed on the walls by my bed. How the giant pumpkin pillow I keep on my bed all year round fits in to the theme I don't know.
Posted by wildcat1001 at 8:59 AM No comments: