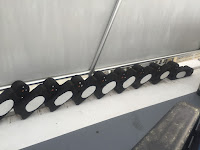 This afternoon I heard noise on the upper deck and thought it was the lounge chairs getting pushed around by the wind. Instead I found most of my penguin army had fallen over. The noise seems to have been the trash can being blown over and rolling around on the deck until it hit the row of penguins. 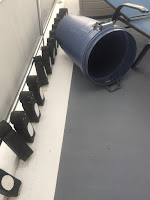 I meant to do something about that trash can the last time it was rolling around. I didn't have anything to secure it before, but at least for now I'm using penguins to weight it down.
Posted by wildcat1001 at 12:52 PM