Captain Morgan in the front yard 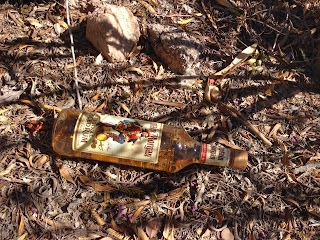 While not as strange as the onions in the backyard I posted about earlier, the Captain Morgan in the front yard was another new experience.  Growing up in this university neighborhood and living at different places in it over the years, finding empty beer bottles or cans when cleaning the yard is pretty much a given.  So, when I was cleaning up some of the trash in the yard of the rental property I was not surprised to find two cans of Coors in the bushes.  What I was surprised to find, though, was a bottle of Captain Morgan's Spiced Rum.

It would be one thing for there to be an empty bottle, but it was almost full.  It was not even hidden deep down under live bushes like the cans, but rather was right up near the sidewalk by the dead bushes.  Someone trying to stash it to come back for it later?  Well, too bad for them it is now poured down the drain and the bottle recycled.
Posted by wildcat1001 at 8:30 PM